Robert “Don Pooh” Cummins is a major player in the music industry. As the head of both Don Pooh Management and DP Music Group, and an accomplished music executive, he has guided the careers of some of the most successful and celebrated names in Hip Hop and R&B. 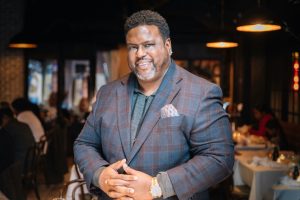 During his time as a music executive, he worked closely with several Hip Hop superstars including Jay-Z, Sean “Diddy” Combs, and The Notorious B.I.G.. He discovered famed Brooklyn rap artist, Foxy Brown.  Who he managed and guided into becoming one of hip hop’s multi-platinum superstars. He also helped form the supergroup “The Firm” with NAS, AZ, and Foxy Brown.

He later discovered Shyne and also did a deal with Bad Boy Records to release Shyne’s first album. In 1999, he accepted the position of Executive Vice President at MCA Records, then home to artists such as Mary J. Blige, Blink 182, Shaggy, and The Roots among others.  One of his greatest accomplishments at MCA was personally overseeing and co-executive producing Mary J. Blige’s “No More Drama” album, which earned the multi-platinum megastar her first Grammy Award. The album sold 7 million worldwide and he has continued to work with Mary J. Blige to this day. 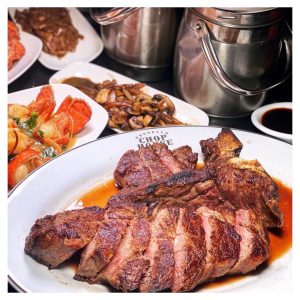 Having a diverse portfolio is a key principle to investing for an entrepreneur or anyone who wants to invest. It is a risk strategy to minimize loss. Having money spread out across different assets reduces the potential of losses. If one investment is performing poorly over a certain period, other investments may be performing better over that same period.

A Brooklyn Native of Barbadian descent, Robert “Don Pooh” Cummins decide to diversify his assets and became a staple in the franchise food and beverage industry. And the acclaimed restaurateur and owner of Brooklyn Chop House in NYC in November 2018.

Mr. Cummins started his journey into the franchise business where he signed a 16 store development deal with Papa John’s to increase their footprint in NYC. In 2005, he acquired the rights to develop Checkers restaurants in NYC. Where he built and opened two restaurants in Brooklyn and the Bronx. After successfully developing and opening several Papa John’s and Checkers in the NYC area, he took things to the next level.
In 2007 Cummins secured another huge franchise development deal to build and operate several IHOP restaurants across the New York City Metropolitan area over the next seven years. By securing the exclusive rights to the Brooklyn area, he seemed to have struck gold. He opened his first IHOP in the Downtown area of Brooklyn in December 2007 and it ranked #1 in sales in its first year out of more than 1,400 restaurants across the U.S. In 2011, he opened his second IHOP in the Flatbush area of Brooklyn.

In August 2015, Robert opened a 4th location, which would be a re-location of his first and highest volume IHOP to a new spot in Downtown Brooklyn.Brooklyn Chop House is a restaurant located in FIDI (Financial District) and sits 150 with two private dining rooms and 35 at the bar. The exposed brick walls and floor to ceiling velvet curtains give a nice balance of romance and intimacy. Opened in November of 2018 Brooklyn Chop House is a crowd favorite with both local and celebrity fans. The menu features a Fusion between traditional Steakhouse and Asian Cuisine. Brooklyn Chop House is offering outdoor dining– it’s the perfect time to explore the unique menu at Brooklyn Chop House and enjoy the final weeks of Summer.

What are some of the exciting things since the launch of the Brooklyn Chop House?

Seeing how much people love the food and the concept of a steak house fused with Asian cuisine.

You’ve been extremely successful in the music industry. What inspired you in 2007 to become a restaurateur?

The ability to diversify some of my assets into food and beverage especially franchising.

What do you love most about being involved in Brooklyn Chop House?

Prior to being involved, steakhouses and Asian cuisine are two of my favorite cuisines so to fuse the two made it exciting.

Why Brooklyn Chop House? You’re located in NYC.  What’s the inspiration behind the restaurant and its name?

I was born and raised in Brooklyn, Brooklyn is our brand and it’s by the Brooklyn bridge. Chop House is inspired by chopsticks and chop steaks and being from Brooklyn, working with Notorious B.I.G., we want to bring Brooklyn to as many other places as possible.

What is your vision for Brooklyn Chop House?

Our vision is to expand to a few more markets, preferably Atlanta, LA, and Miami. Also, to make it a household name and a brand you can pick up at any grocery store with our frozen food line in stores January 2021 in Walmart.

What can we expect to see from you in the future?

Our sister brand Brooklyn Dumpling Shop, which we hopefully want to franchise and have multiple locations all over the country in the next 5 years.

How has COVID-19 changed the way you do business?

Drastically. We went from a fully operating 150 seat restaurant down to zero seats and we’ve had to adapt to doing deliveries and takeout and now the ability to do outdoor dining. It’s been tough, but New Yorkers are resilient and we’ll get through it.

Get to know Brooklyn Chop House and Robert “Don Pooh” Cummins and stay tuned for all of the plans Mr. Cummins has for his brand.

Brooklyn Chop House Southampton also popped up at The Capri Hotel for the past two summers.  The company is also in talks to expand to Los Angeles and Las Vegas. Patti LaBelle became such a fan of Brooklyn Chop House that she teamed up with Mr. Cummins to create a frozen line of the restaurant’s famous dumplings, which will be hitting Walmart soon.

Robert is currently working on a major real estate development deal for affordable housing in Newark, New Jersey.  In addition to all of that, he’s currently penning his memoir called “How I Hop” and gearing up to open a new Quick Serve Restaurant concept called Brooklyn Dumpling Shop in the East Village this August with nearly zero human interaction.

To Support and Celebrate Brooklyn Chop House we will be doing a giveaway starting August 11th on Instagram (Stay Tuned and follow us on Instagram @brooklynslifestyle).

Hole in the Wall makes its way to Williamsburg Brooklyn